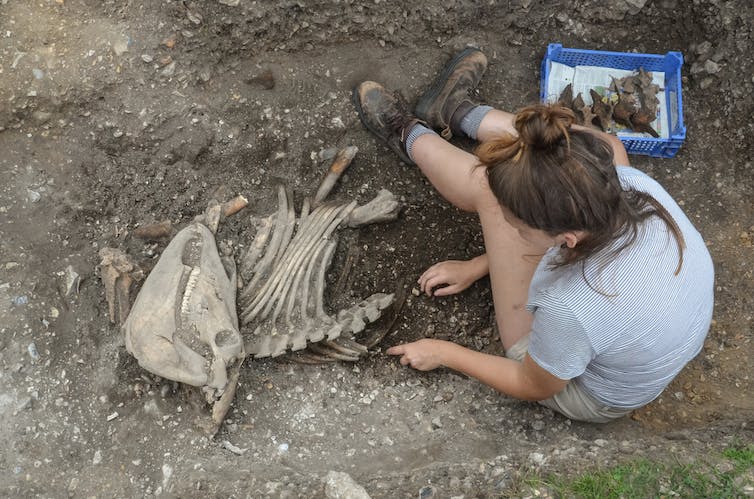 This is not the first Brexit, apparently. That “watery Brexit” happened around 6,000 BC when Britain was detached from continental Europe with the final formation of the English Channel as it is today. Or maybe it occurred two millennia later, when late Neolithic populations in Britain cut themselves off from the rest of Europe in what has been called a “Neolithic Brexit”.

The feverish Brexit neurosis that has engulfed the UK for the past few years consumes everything and has poisoned the well of public discourse. It has even infiltrated narratives about our ancient past.

In a recent paper, I suggest public understanding of prehistory is being shaped by the “Brexit hypothesis”. This is the proposition that any archaeological discovery in Europe can – and probably will – be exploited to argue in support of, or against, Brexit, if not by archaeologists, then certainly by the general public.

The public reception to archaeological research, from excavations, and big data projects, to ancient DNA studies and museum exhibitions, is increasingly jaundiced by misleading and opportunistic allusions to Brexit. More troubling are connections being made from outside the discipline between such prehistoric research and a host of Brexit-related issues such as identity, immigration and nationalism.

Archaeological data and ideas are cropping up in all sorts of weird and sinister places. Researchers Lorna-Jane Richardson and Tom Booth have done vital work on how ancient DNA studies have been exploited on the neo-Nazi website Stormfront and others. Their research showed that archaeological data was being “used to uphold ultra-racist political beliefs”. Heritage expert Chiara Bonacchi and her team recently undertook a study of 1.4m posts, comments and replies across hundreds of Brexit-related Facebook groups, such as Pro Great Britain, and concluded, among other things, that recurring wrongheaded parallels – both pro- and anti-Brexit – were made between the EU, the Roman Empire and “barbarians”.

If left unchallenged, archaeological and ancient genetic data can add a sense of legitimacy to arguments, based on a misguided view of the relevance that information about prehistoric people, activities and social change have to our present condition. My research, and that of others such as Bonacchi, shows that these data have been used to underpin racist worldviews, push nationalist agendas, denigrate immigrants, influence voters, and ultimately detract from our understanding of prehistoric people. For instance, by the time research into social change during the third millennium BC has been reduced in the Daily Telegraph to the phrase “no-one living in Britain today is truly British” then the story is no longer about prehistoric social complexity.

Lessons from the distant past have even been used to justify Brexit itself. A recent example was the Daily Mail’s take-home message from Making Connections, an exhibition at Stonehenge visitor centre that focuses on cross-Channel connections between Britain and Europe in the Neolithic and Bronze Age. The paper’s headline was: “Stonehenge exhibition of ancient artefacts reveals how Britain has ALWAYS had a fraught relationship with ‘Europe’.” This implies that Brexit is just another incarnation of this rocky relationship and so offers legitimacy to the Brexit process as prehistorically the natural state of things.

Archaeologists have enabled these narratives and twisted readings of the past to go largely unchecked, in some cases inadvertently encouraging Brexit parallels in the way research is publicised, and rarely intervening in public fora when things go wrong. Opinion pieces about all of the Brexits in prehistory, the Roman period and during Medieval times are part of the problem.

This is all consumed by the public, and interest groups, and processed through a Brexit lens. Read below-the-line comments on newspaper stories about archaeological research projects, or follow social media reaction to them to see what I mean.

The reception of the news in early 2018 that the Mesolithic person known as Cheddar Man probably had dark skin and blue eyes is just one example of where a solid piece of archaeological research becomes bent out of shape in the way it is received.

Reactions to this research in newspapers such as the Daily Mail, and on social media, were almost wholly focused on issues of race, identity, skin colour and relations with Europe. It was a toxic mixture, fuelled by grievances against political correctness, accusations of fake news, and active attempts to debunk the work of experts. To see examples of these feverish reactions to the story, search “Debunk Cheddar Man” on YouTube or see far-right websites such as the European Defence League make claims of evidence being twisted by “white-hating lefties”.

All this wasn’t helped by the researchers’ association with a TV show promoted as being about the First Brit, a meaningless concept when this man lived at a time almost 10,000 years before there was a Britain to represent or a Europe to leave.

Prepared to push back

These tropes – the “first Brit”, the “first Brexit” – are not as innocent as they might seem at first glance and should not be used casually. Assigning national identities to prehistoric individuals is both futile and deeply problematic. Doing the same for a contested and complex socio-political process like Brexit even more so.

Archaeologists need to be proactive. Caution is required to avoid promoting lazy Brexit parallels. Crucially, we must be prepared to push back when our work and that of colleagues gets thrown under the Brexit bus. We must be prepared to intervene, correct, provide links to research, and engage with the use and abuse of archaeology for racist and nationalist ends.

This Brexit is the first Brexit. We cannot learn anything from European prehistory that informs our current political impasse. We should not allow public debate to be poisoned with wrong-headed and spurious claims to legitimacy through recourse to archaeological research. Our wonderful, ancient, human past, should not become yet another victim of Brexit.

Kenneth Brophy is Senior Lecturer in Archaeology at the University of Glasgow.